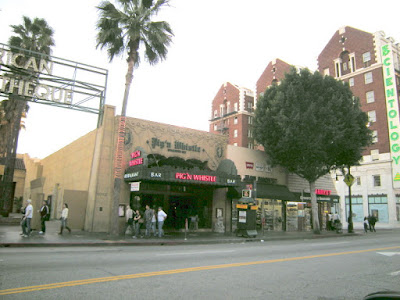 The Pig 'N Whistle offers a feeling of classic Hollywood with a vaulted ceiling, detailed mahogany woodwork and cozy booths. It is a Hollywood landmark that hosted both the first Oscar after-party and Judy Garland's 15th birthday. After a complete renovation in 1999, the Pig 'N Whistle provides a delightful taste of old Hollywood for patrons.

Aside from the comprehensive menu, the Pig 'N Whistle has nighttime entertainment every Wednesday through Saturday. Local and traveling bands perform in the backroom while some of the hottest DJ's spin in the main room. 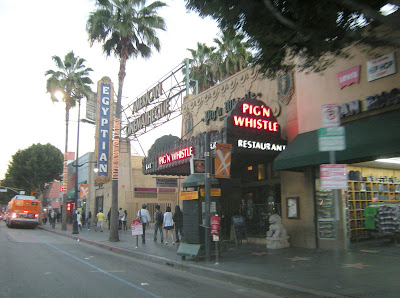 The 1920s were the beginning of Hollywood's golden era. What started as a sleepy suburb of Los Angeles, soon became the center of the movie industry. Movie producers from all over the country rushed to build studios in Hollywood. The city pulsed with new life during the Boom of the Twenties and its main road became Hollywood Boulevard.

Hollywood Boulevard captured the glamour of the time. Celebrities frequented the boulevard and magnificent theaters were built to show their films. Hollywood Landmarks like Sid Grauman's Chinese Theatre, the El Capitan and the Pantages line the boulevard.

The Pig 'N Whistle opened its doors on July 22, 1927. Its stylish design, hand-carved wood décor and traditional American fare made it an instant favorite with the Hollywood crowd. Shirley Temple, Spencer Tracy, Clark Gable and Loretta Young were regulars embracing the laidback but beautiful atmosphere.

Connected to the forecourt of the Egyptian Theatre by a side entrance, The Pig 'N Whistle quickly became the place for stars to gather after movie premieres and discuss the business over cocktails. Household names like Cary Grant, Jane Wyman or Walter Pidgeon could often be spotted at The Pig 'N Whistle having lunch and reading the trades or enjoying dinner, dressed to the nines after a glamorous evening at the Egyptian.

The original Pig 'N Whistle was part of a chain that extended along the Pacific Coast from Seattle to Los Angeles. Hollywood was one of twelve different locations - four in Downtown Los Angeles, one in Hollywood, one in Pasadena and others in San Francisco, Seattle and Portland. While most of the restaurants featured a simple design, the Hollywood setting called for something more elegant so renowned architects Morgan, Walls & Clements were enlisted to create a masterpiece.

One of the most prominent firms in Los Angeles, Morgan, Walls & Clements (responsible for designing the El Capitan Theatre, Wiltern Theatre, and Globe Theatre among others), remodeled 6714 Hollywood Blvd., a former clothing store, into a place of "quiet dignity and resplendent luxury" (Hollywood Citizen-News, July, 1927). Highlighted by hand-painted decorative tiles (featuring The Pig 'N Whistle logo of a dancing, flute-playing pig), elaborate carved wood ceilings and an ornate organ, the original restaurant featured a colorfully stenciled Italian Renaissance dining hall, a balcony for private parties and a baronial banquet room.

The Hollywood Boulevard Pig 'N Whistle closed its doors in the early 1950s. The restaurant became a clothing store and then a "Numero Uno" until it was rescued and meticulously restored to its former elegance by restaurateurs Chris Breed and Alan Hajjar in early 2001. 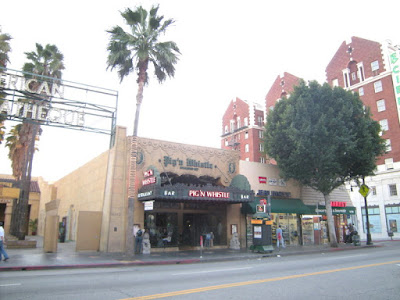 Called the Pig 'N Whistle, the name inspired by it's fanciful logo of a dancing pig playing a flute. A side entrance to the new family restaurant opened right out into the grand courtyard of the Egyptian Theatre, so movie-goers could easily move from the restaurant to the theatre and vice versa.

From July 22, 1927 to the late 1940's, the Pig 'N Whistle served a loyal Hollywood audience and became something of a Hollywood landmark, surviving both the Great Depression and World War II.

Among its fans were any number of celebrities during Hollywood's Golden Age. Shirley Temple was a regular. Spencer Tracy, Loretta Young, Howard Hughes and Barbara Stanwyck all dined there. A story in "Film Fan" magazine tells about young Judy Garland's day out with friends at the Pig 'N Whistle, back in 1939, the year she made "The Wizard of Oz." Johnny Weismuller, of "Tarzan" fame, was served a soda by a young singer named John Gary, who worked there as a waiter.

But as the 50's approached, Hollywood was changing. Elizabeth Short (AKA "The Black Dahlia") was seen at the Pig 'N Whistle in the weeks before her gruesome murder. By 1949, the Pig 'N Whistle was closed, it's wooden booths purchased by the nearby Miceli’s Italian Restaurant.

The Pig 'N Whistle reopened after two years of work in March of 2001.