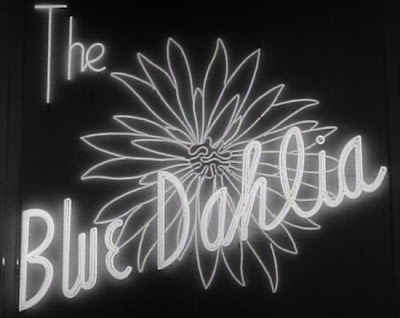 The Blue Dahlia (1946) is an American film noir directed by George Marshall and written by Raymond Chandler. A navy officer returns home to an unfaithful wife, who is later murdered.

The film marks the third pairing of stars Alan Ladd and Veronica Lake.[1] 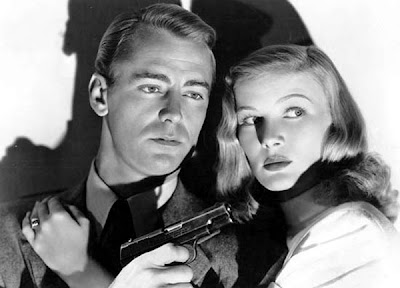 Navy pilot Lieutenant Commander Johnny Morrison (Alan Ladd) is put on the inactive list. He returns home to Hollywood from the fighting in the south Pacific, bringing along his buddies and medically discharged crewmates Buzz Wanchek (William Bendix) and George Copeland (Hugh Beaumont). Buzz is prone to memory lapses and headaches, and is often short tempered, all likely due to his head wound.

Johnny finds his wife Helen (Doris Dowling) living (and partying) in a hotel bungalow. When he spots her kissing her boyfriend Eddie Harwood (Howard Da Silva), the owner of the Blue Dahlia nightclub, he punches Eddie. Though Johnny is willing to try to salvage their troubled marriage, Helen is not. She tells him that their son did not die of diphtheria as she had written him, but because she got drunk at a party and crashed her car. Johnny pulls a gun on her, but decides she is not worth it. He drops the pistol and walks out, taking a framed photograph of their son.

When Buzz comes looking for Johnny, Helen picks up him in the hotel bar and brings him home, neither one knowing who the other is. Later, Helen calls Eddie and becomes angry when he wants to break off their relationship. Eddie drops by that night to straighten things out. All these comings and goings are noted by the house detective, "Dad" Newell (Will Wright). Dad sees Eddie and gets paid to keep his mouth shut. He later sells information about Johnny's whereabouts to his worried friends.

By chance, Johnny is offered a ride by Joyce (Veronica Lake), Harwood's estranged wife, though he tells her his name is "Jimmy Moore" and they remain unaware of their connection. He brushes off her attempts to become better acquainted and gets out of the car. She spends the night at the same inn. When they meet again at breakfast, she talks him into a walk along the beach. However, when Johnny hears on the radio that Helen has been found dead and that the police are looking for him, he leaves without keeping the rendezvous. She puts two and two together and guesses his identity.

Johnny hides out in a flophouse run by Corelli. When he catches Corelli going through his suitcase, a scuffle breaks out, during which the frame of his son's picture is broken. Johnny discovers a message written by Helen and addressed to him on the back of the photograph; it states that Eddie's real name is Bauer, and that he is wanted in New Jersey for murder. Johnny pays a visit to Eddie, but before he can do anything, Joyce shows up. Upon learning her identity, Johnny leaves in disgust, in the mistaken belief that Joyce was helping her husband all along.

Meanwhile, Corelli calls Eddie's business partner Leo and tells him about Johnny. Leo and one of his men pick up Johnny by pretending to be policemen and take him to Leo's ranch. When the henchman finds and reads Helen's message, Leo has no choice but to dispose of him. Then, though his hands are tied, Johnny manages to strangle Leo and cut himself free before Eddie arrives. Eddie admits to killing a man during a robbery fifteen years ago, but denies murdering Helen, pointing out that he could easily have arranged it much more discreetly. Just then, Leo regains consciousness and tries to shoot Johnny. In the ensuing brawl, Leo accidentally kills Eddie before he himself is shot dead.

When Johnny turns himself in, he finds Buzz about to confess to Helen's murder, even though he cannot remember what happened that night. Johnny is certain he is innocent. He helps Buzz recall that he just walked out. Police Captain Hendrickson (Tom Powers) then accuses Dad (who has already admitted to blackmailing Helen). Hendrickson suggests that when she refused to pay his increased demands after her husband's return, Dad killed her, fearing that she would turn him in to the police or worse, tell Eddie. Dad confesses and pulls out a gun. When he is distracted, Hendrickson shoots him. Afterward, Johnny and Joyce get together. 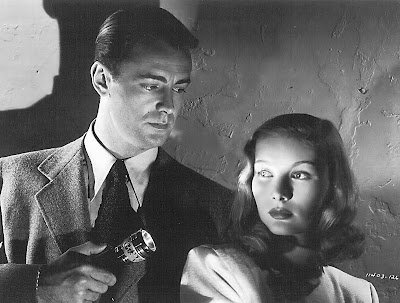 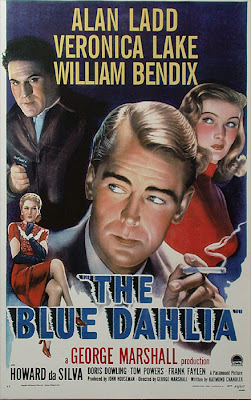 Halfway through the script, Chandler became unable to write. A former alcoholic, he'd become a teetotaler for health reasons. He decided that the only way he could get inspiration to finish the script was drunk. For several weeks, he drank heavily, and at the end of that time, presented the finished script.[2]

The staff at Variety magazine gave the film a positive review and wrote, "Playing a discharged naval flier returning home from the Pacific first to find his wife unfaithful, then to find her murdered and himself in hiding as the suspect, Alan Ladd does a bangup job. Performance has a warm appeal, while in his relentless track down of the real criminal, Ladd has a cold, steel-like quality that is potent. Fight scenes are stark and brutal, and tremendously effective."[3]

Critic Dennis Schwartz called the film, "A fresh smelling film noir directed with great skill by George Marshall from the screenplay of Raymond Chandler (the only one he ever wrote for the screen, his other films were adapted from his novels). It eschews moral judgment in favor of a hard-boiled tale that flaunts its flowery style as its way of swimming madly along in LA's postwar boom and decadence."[4]

The Blue Dahlia was dramatized as a half-hour radio play on the April 21, 1949 broadcast of The Screen Guild Theater, starring Veronica Lake and Alan Ladd in their original film roles.