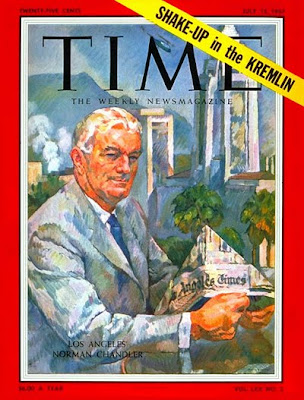 Chandler, publisher of the Los Angeles Times, is accused of involvement in Elizabeth Short's murder, in Donald Wolfe's "The Mob, the Mogul, and the Murder That Transfixed Los Angeles." In a complicated scenario involving multiple perpetrators, Wolfe claims that Chandler impregnated Short while she was working as a call girl for the notorious Hollywood "madam" Brenda Allen, which led to Short's murder at the hands of gangster Bugsy Siegel. Wolfe's claim that Short was a prostitute is at odds with the Los Angeles County district attorney's files, which plainly state that she was not, as is Wolfe's assertion that she was pregnant.[6]

Chandler attended Stanford, where he was a member of Delta Kappa Epsilon fraternity (Sigma Rho chapter). After dropping out of Stanford, Chandler started working at the newspaper as a secretary to his father, Harry Chandler, who had been its publisher since 1917. Norman Chandler became general manager in 1936, president in 1941 and at his father’s death in 1944, the third editor of the newspaper.

The Times prospered under Chandler, and gained regional, as well as national, prominence. In 1947 it became the largest-circulation newspaper in Los Angeles, and in 1961 the Sunday paper had a circulation of more than one million. Chandler retired as publisher in 1960, leaving the job to his son Otis Chandler, but remained as chairman of the board from 1961-1968.