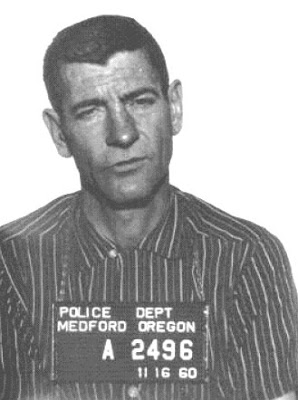 Jack Anderson Wilson (aka Arnold Smith) was a life-long petty criminal and alcoholic who was interviewed by author John Gilmore while Gilmore was researching his book Severed. After Wilson's death, Gilmore named Wilson as a suspect due to his alleged acquaintance with Short. Prior to Wilson's death, however, Gilmore made an entirely different claim to the Los Angeles Herald-Examiner in a story appearing January 17, 1982. While Severed says that homicide Detective John St. John was about to "close in" on Wilson based on the material Gilmore provided, St. John told the Herald-Examiner in the same article that he was busy with other killings and would review Gilmore's claims when he got time. As reliable sources of information about the case, such as the FBI files and portions of the Los Angeles district attorney files, have become publicly available, statements about Short and the murder attributed to Wilson in Severed and supposedly tying him to the crime have not been borne out as accurate. Severed also claims Wilson was involved in the murder of Georgette Bauerdorf. Severed, and many other sources based on Severed, erroneously claim that Short and Bauerdorf knew each other in Los Angeles, supposedly because they were both hostesses at the same nightclub. In reality, by the time Short arrived in Los Angeles in 1946, Bauerdorf had been dead for two years and the nightclub had been closed for a year. Wilson was never a suspect until Gilmore brought him to the attention of authorities. 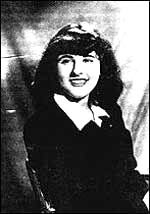 Wilson figures in Donald Wolfe's book The Mob, The Mogul, And The Murder That Transfixed Los Angeles. Wolfe hypothesizes that Wilson was present at Short's murder and claims a connection between Wilson and gangster Bugsy Siegel through some small-time gangsters Wilson supposedly associated with. He was also part of the military. 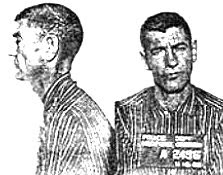 In a murder as blatant as the Black Dahlia's, and with repercussions as far reaching, it seems almost impossible that while L.A's finest turned up absolutely nothing on the case, while dozens of false confessions poured into the LAPD and a bogus package from the killer was found in the mail with letters cut out from different newspapers reading "HERE ARE DAHLIA'S BE-LONGINGS - LETTER TO FOLLOW" while the main detective on the case doctored the coroner's reports, and while press and cops battled and a grand jury convened to savage the LAPD for misconduct, Elizabeth Short's real killer - Arnold Smith - slipped easily through the cracks.

In the enormous and enormously old world of homicide, Arnold Smith ranks as one of its most unique characters, if only because he came tailor-made for the Black Dahlia story. Shedding light on Smith - a thin alcoholic who stood around 6'4", walked with a limp, had a five-page rap sheet and a dozen different aliases, imbues the Black Dahlia story with even more intensity than it already possessed. Smith is the mysterious shadow who lurks throughout the SEVERED book, whom police could never quite pinpoint. While Elizabeth Short was still alive, rich socialite Georgette Bauerdorf (an acquaintance of Short's) was murdered and left in her bathtub; police investigated all leads except one. A man whom Bauerdorf had dated - a tall man who walked with a limp - couldn't be found. Bauerdorf's murderer fled in her car, which was abandoned near 25th and San Pedro. A week after the murder, Herald Express newspaper reporter Aggie Underwood received a tip that a tall, thin man walking with a limp was seen walking away from 25th and San Pedro. Many, many years later, Arnold Smith emerged as a suspect in the Black Dahlia case only because he related the story to an informant who in turn gave him enough money to stay loaded. However, Smith explained that he wasn't responsible for the murder; an acquaintance of his - one Al Morrison (who never existed) - had murdered Short in a house on East 31st by San Pedro and Trinity, and later told Smith.

In a taped interview given to the LAPD by the informant, Smith related details about the murder that only the murderer could have known. Interestingly, just like with Georgette Bauerdorf, a bathtub had been used in Elizabeth Short's murder - in this case to drain away her blood. Hot to nail him (and certain that Al Morrison was just a decoy to protect the real killer - Smith himself) the LAPD and Detective Badge Number One, John St. John, managed to arrange another meeting between the informant and Smith, at which time they would finally have their man. 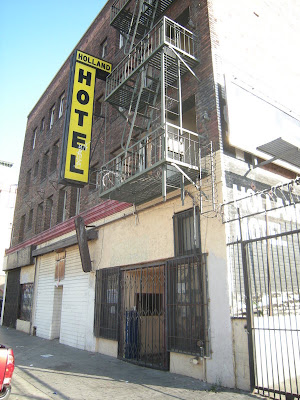 In the case's most astonishing twist, Smith nodded off while smoking only days before the meeting, and died in a fire in his tiny room in the Holland Hotel near downtown L.A. 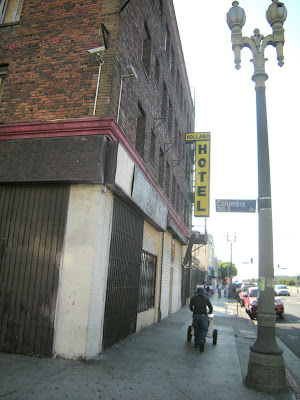 So the enigmatic specter who was probably responsible for the enigmatic Black Dahlia's murder - and at least one other - reared his head years after the murder and then was suddenly gone. And it wasn't, as so many had assumed, a jealous doctor, a physician with the skill to surgically cut Elizabeth Short into two. It was just a drunken loser, one of countless zeros wandering around Los Angeles. 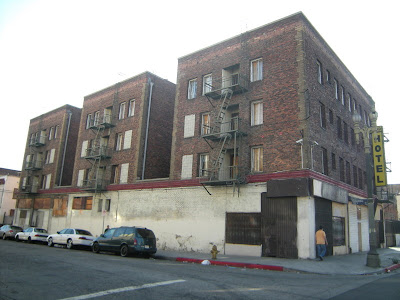 A Conversation with John Gilmore

RM: USC's Sherry Mazingo said that if the murder were ever solved, it would take some of the "dramatic sheen" off the story. With what you discovered (about Arnold Smith) I think it becomes, if anything, more dramatic than it already was.

JG: It's an American phenomenon It's the epitome - epitome is not the right word. It*s kind of the optimum of whatever - of sex and violence that you can probably have in our culture.

RM: For me, one of the more maddening aspects of the book was the lack of dates toward the end. When did Arnold Smith die in that fire?

JG: '82. Did you by chance read that article? The article about me on the case? It was front-page stuff, in the Herald Examiner in '82. (Note: the aforementioned article. headlined "BLACK DAHLIA: Author claims to have found 1947 murderer," appeared on the front page of the Herald Examiner, January 17,1982, before Arnold Smith died, understandably freaking out Detective John St. John. The strange article claims that Gilmore himself took the story of Arnold Smith to homicide, which contradicts the SEVERED book, wherein an informant brings the story to homicide, which then leaks to the press.)

JG: This is before Arnold Smith died. St. John got involved in the case, and then Smith died. A very bizarre story. Strange fire. I've been in that room since then.

RM: He fell asleep while smoking, right? St. John mentioned suicide, saying you can't tell with someone as down and out as Smith was.

JG: He had a 3-point something blood alcohol level. But he stayed that way pretty much all the time. Undoubtedly, he lit himself on fire smoking in bed. The coroner wanted to investigate it as a possible homicide, you know. They kept Smith's body, which I found to be most interesting. They don't want to say that now. But it's totally shut. The case is totally shut.

RM: So you are convinced beyond any reasonable doubt that it was Arnold Smith.

RM: I guess there's still factions of people who don't believe that at all.

JG: Some people don't want to think that it's solved. Or that this is an explanation. I personally am convinced and a lot of other people are- the police, the sheriff's department. A lot of skeptics out in the world might very well not be, but it doesn't really matter... If you look at the autopsy report, and see things that happened, there's no two ways about it. She did not die as the world always believed she died.

RM: What about a guy like Smith? Why, in the eariy 80s, did he start talking? He must have known he was going to get nailed.

JG: St. John wanted to meet him very badly, of course, but there was no way that they were going to meet together. Smith was a little too crazy for that. But...it was time, I guess. He'd been worked on for a long time.

JG: No, it's not incredible. Because it happens all the time. When so many different ingredients come in to play, then it becomes a big deal. Extremely high profile. But homicide... a friend of mine, who works unsolved, they can't keep up. It's not unusual that homicides occur without any link to the killer whatsoever. It happens a great deal of the time.

RM: Even with something this blatant? Where he actually drives the body to a field and arranges it?

JG: But these other victims are not glamorous, they weren't actors in Hollywood, they weren't mysterious; they weren't called the Black Dahlia. How can you beat that, you know.? All those ingredients came together to make this enormous, American phenomenon. This noir phenomenon.

RM: In Lyncll George's 1994 L.A Times article, there's the great line where she says Short fell into the same orbit as a killer."

JG: I think he knew who she was from the USO club (where Short and Smith apparently hung out), and for him it became at that point a case of stalking her. I absolutely, firmly know that he was a killer who stalked. He stalked and cultivated a relationship -I don't know exactly what type it was. With them, I think it was a very strange connection of the cripple. She was crippled. She was a defective individual, and he was a defective individual. And you have a tense situation with people whose nerves are on the surface, where the antennas are very clear with one another. Very clear. I think he was a man who just overrode all boundaries. I don't think he even recognized boundaries in life. And she was the first one who said, I don't have boundaries. Plus he was stalking her, so it was simply a matter of time. I believe it was an inevitable occurrence, and an inevitable place, which she would go. as well. I don't fault the idea that she became a huge star, in her own way, in death. Elizabeth Short could have been a very beautiful girl, and been in movies, and everything else. I think she was also very driven- not even knowing she was as driven as she was, desperately afraid of running into herself. So she played these games out with men, and reached a point where she was getting close to running into herself - it was time to get up and do the act. And she couldn't do the act - I think it was a moment of great anxiety for her, which might have been all along leading up to a point where she fled. She left and ran. I think (Smith) was there at the right time, at the right place, as if to say, take my hand - the spider and the fly. And I think she was a willing fly. She was willing herself into the crime, as weird as that might sound. So you could look at him as an incidental thing, an appendage to her success or something, as a noir star. A dark star.