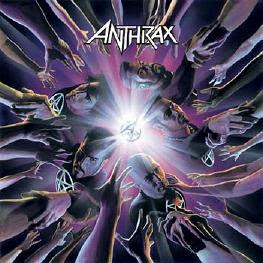 We've Come for You All

We've Come for You All is the ninth studio album by American heavy metal band Anthrax. It was produced by the band and Scrap 60, and includes the singles "What Doesn't Die," "Safe Home," and "Taking the Music Back." It is considered a comeback album for the band after lackluster commercial success of their previous two records. Despite its success, the album only reached #122 on the Billboard 200 charts. It is also the first Anthrax record featuring Rob Caggiano on lead guitar and the last to feature original material with John Bush on vocals.

"Strap It On" and "Cadillac Rock Box" both feature guitar solos by "Dimebag" Darrell Abbott. A hidden track is also featured on the album; one minute after the last song ends, one can hear a percussion outtake which was not used because Charlie Benante was unaware he was humming.

The song "We're a Happy Family" was originally recorded by the Ramones on Rocket to Russia.

The single "Safe Home" features a ballad-like chorus and strong melody. Its music video features film actor Keanu Reeves. The video aired heavily on Uranium upon its release. In contrast, "What Doesn't Die" features a much darker musical tone and lyrics with a notably heavier style.

The album has also been released in several different limited editions in both CD and vinyl format. On CD editions, the following bonus tracks are included.