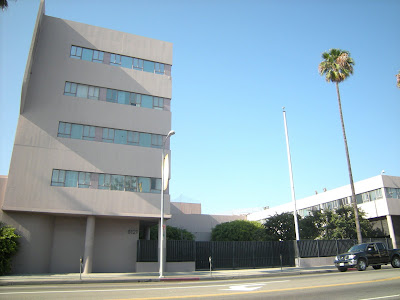 Brittingham's Restaurant was in the KNX/CBS Columbia Square Building, Hollywood.This appears to be the only reliable restaurant name associated with Elizabeth Short, "the Black Dahlia." [???] It was owned by "A.A. Brittingham" and was a star hang out due to the proximity to KNX and CBS in Hollywood. 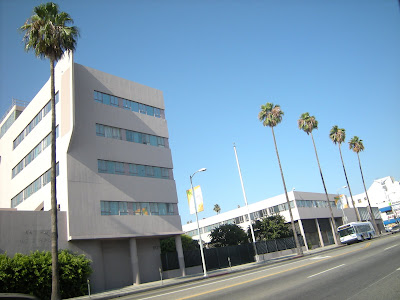 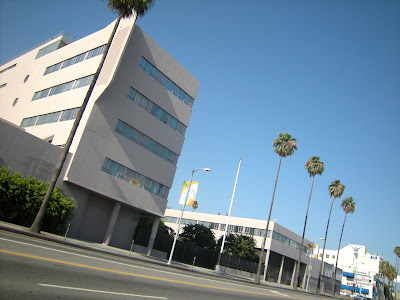 CBS Columbia Square, located at 6121 Sunset Boulevard in Hollywood, Los Angeles, California, was the home of CBS's Los Angeles radio and television operations from 1938 until 2007. The building housed the CBS Radio Network's West Coast facilities, as well as CBS' original Los Angeles radio stations, KNX and KCBS-FM. What is now KCBS-TV moved into the complex when CBS acquired that station in 1951, and the CBS Television Network's West Coast operations were based there until it moved to the larger CBS Television City in November 1952. After its purchase by CBS in 2002, KCAL-TV moved to the Square from studios adjacent to CBS' then-corporate sibling Paramount Pictures. Between 2005 and 2007 all of these operations moved to other facilities in the Los Angeles area.

Columbia Square was built for KNX and as the Columbia Broadcasting System's West Coast operations headquarters on the site of the Nestor Film Company, Hollywood's first movie studio. The Christie Film Company eventually took over operation of Nestor Studios and filmed comedies on the site, originally the location of an early Hollywood roadhouse. Prior to moving to Columbia Square, KNX had been situated at several Hollywood locations.

Columbia Square was designed by Swiss-born architect William Lescaze[1] in the style of International Modernism and built over a year at a cost of two million dollars — more money than had ever been spent on a broadcasting facility.

Lescaze's sweeping streamline motifs, porthole windows and glass brick were true to Modernist design, though CBS President William Paley insisted the Square's form follow function. In his dedicatory speech, he remarked, "It is because we believe these new Hollywood headquarters, reflecting many innovations of design and acoustics and control, will improve the art of broadcasting that we have built them and are dedicating them here tonight."

Columbia Square opened on April 30, 1938 with a full day of special broadcasts culminating in the star-studded evening special, "A Salute to Columbia Square" featuring Bob Hope, Al Jolson and Cecil B. DeMille. Crowds thronged Sunset Boulevard and a blimp bathed in searchlights hovered overhead as the program was carried coast-to-coast on the Columbia Broadcasting System, beamed to Europe via short wave, and carried across Canada on the CBC. On that premiere broadcast, Hope joked that Columbia Square looked like "the Taj Mahal with a permanent wave." Jolson quipped, "It looks like Flash Gordon's bathroom." 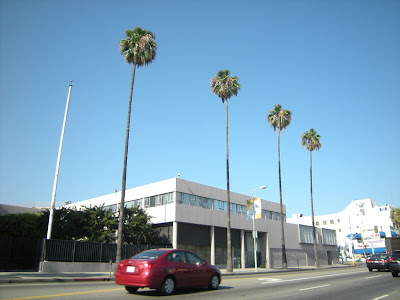 The Square's original configuration included eight studios. Studios 1 to 4 were to the left of the main entrance. Upstairs were Studios 5 and 6 as well as Studio 7. At the back of the forecourt was the large auditorium referred to as the "Columbia Playhouse" and it seated an audience of 1050. In 1940 to the east of the auditorium were constructed two new audience theatres which were called "Studio B" and "Studio C" with each seating approximately 350 people. Shows such as Jack Benny's "Lucky Strike Program" and "The Adventures of Ozzie and Harriet" emanated from Studio B. Lucille Ball's "My Favorite Husband", "Blondie", and "Dr. Christian" are a few of the shows that used Studio C. When B and C were built, the Columbia Playhouse then took the letter designation of "Studio A". Studio A was home to "The Silver Theatre", "The Swan Show starring George Burns and Gracie Allen", "The Lady Esther Screen Guild Players" and countless others. The complex included Brittingham's Radio Center Restaurant, a men's clothing store, and a branch of the Bank of America. Tours of the studios cost 40 cents and passed by a glass-windowed control room housing Columbia's West Coast master control.

"Columbia Square was one of the glories of radio. It was somewhat sacred to those in the industry. There was nothing comparable to its splendor in New York" says writer-producer Norman Corwin whose most famous broadcast, On a Note of Triumph, originated from the Square on VE Day, 1945.

In early 2009, CBS Columbia Square Studios were designated as a historic-cultural monument by Los Angeles Cultural Heritage Commission and the City Council.

In the 2005 KNX broadcast, "A Salute to Columbia Square," announcer George Walsh recalled crowds jamming the Square's forecourt for tickets to live broadcasts. (Ushers would sometimes walk down Sunset Blvd. to NBC's studios at Vine Street to urge audience members to watch a Columbia Square broadcast instead.) After their on-air appearances, actors would dash to the Radio Actors Telephone Exchange in the Square's lobby to check with their agents about their next bookings.

Bob Crane was a top-rated KNX deejay at Columbia Square in the 1960s. James Dean was an usher. The pilot for I Love Lucy was filmed on the Square's stages in TV's early years. Some of the Square's once-luxurious radio theaters were converted to recording studios for Columbia Records where Bob Dylan and Barbra Streisand, among many top stars, recorded albums.

KNX moved into new studios in the Miracle Mile neighborhood on L.A.'s Wilshire Boulevard which it shares with CBS Radio stations KFWB, KTWV, KRTH and KAMP. KNX, the last radio station to operate in Hollywood, moved after 67 years of operation at the Square just after 11:00 p.m. on August 12, 2005 following a farewell broadcast from its Columbia Square studios. On April 21, 2007, KCBS-TV and KCAL-TV left the building and moved their operations to the CBS Studio Center in Studio City, thus ending Columbia Square's status as a broadcast facility, one of a very few remaining in Hollywood.

The Square fell into disrepair during the years in which Laurence Tisch was at the helm of CBS, and asbestos problems have been cited as a reason to demolish the broadcasting venue. Columbia Square was acquired for $15 million by Sungow Corp in 2003. In August 2006, the property was acquired by Las Vegas-based developer Molasky Pacific LLC, for $66 million. It plans to redevelop the 125,000-square-foot (11,600 m2) complex to continue to attract entertainment industry tenants. It is considering options that would include adding some residential units to the office and broadcasting facility. The project is valued at $850-million and is the largest development project in Hollywood, California. Developers plan a major mixed-use project that will take up an entire city block and restore the 105,000-square-foot (9,800 m2) historic CBS building as creative office space. Other proposed elements include a 380,000-square-foot (35,000 m2) office tower, 400 housing units, 12,200 square feet (1,130 m2) of retail and a 125-room boutique style hotel. Groundbreaking is hoped for 2009.

In the fall of 2007, the location was chosen for the site of MTV's Real World: Hollywood, which is a Viacom owned show. (Viacom owned CBS until 2006, when the companies split in two, but National Amusements is still owner of the two firms.)

The National Trust for Historic Preservation and Los Angeles Conservancy have been actively engaged in efforts to preserve the Hollywood landmark.

These efforts have been hindered by recent developments, including a car wash worker strike. 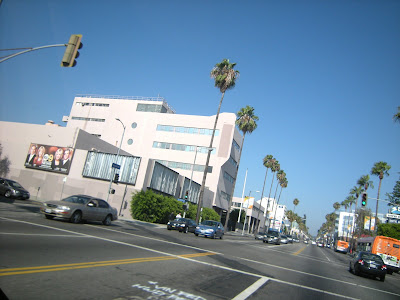 Having been a part of the Online Universal Work Marketing team for 4 months now, I’m thankful for my fellow team members who have patiently shown me the ropes along the way and made me feel welcome