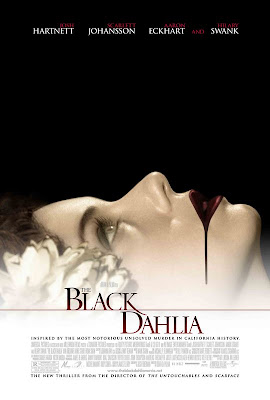 The Black Dahlia is a 2006 crime film directed by Brian De Palma. It is based on the novel of the same name by James Ellroy, writer of L.A. Confidential. The story is based on the murder of Elizabeth Short. The film had its world premiere as the opening film at the 63rd Venice Film Festival on August 30, 2006. The film's wide release was on September 15, 2006. 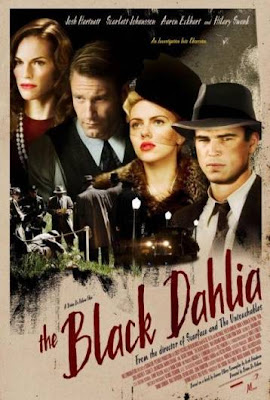 The Black Dahlia shooting on location in Hollywood, June 2005. Black Angel is on the marquee.The movie was originally in pre-production with David Fincher attached as director and Mark Wahlberg attached to play Lee Blanchard. Wahlberg was forced to drop out due to scheduling conflicts with the planned filming of The Brazilian Job. Fincher originally envisioned "a five-hour, $80-million mini-series with movie stars."[3]

This film was shot in Los Angeles, California and in Pernik, Bulgaria, at an estimated cost of $50 million. Filming took place largely in Bulgaria, no doubt as a cost-saving measure and because of producer Boaz Davidson's ties to production facilities in the country. Only a handful of exterior scenes were filmed in Los Angeles.

James Horner was originally on board the project to score the film's music but in February, 2006 it was reported that Mark Isham had replaced him.[4] 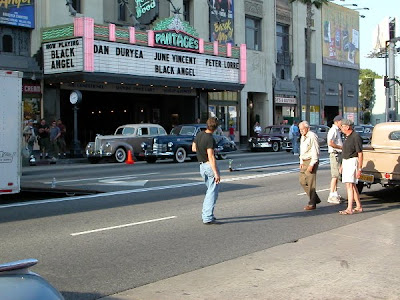 The film follows two detectives in 1940s Los Angeles as they investigate the murder of Elizabeth Short (Mia Kirshner), nicknamed by the press as the Black Dahlia. In a subplot, the two detectives, Dwight "Bucky" Bleichert (Josh Hartnett) and Lee Blanchard (Aaron Eckhart), are caught in a love triangle with Kay Lake (Scarlett Johansson). Blanchard and Bleichert become obsessed with the murder and it gradually consumes their lives, plunged into the depths of an urban underworld rife with pornography, femmes fatales, corrupt police and depraved criminals, a graphic and bloody trail to the solution of the Black Dahlia's murder.

Differences between the novel and the film

In the novel, Bleichert loses the fight to Blanchard legitimately despite having arranged with gamblers to throw the match in exchange for cash with which to place his senile father in a nursing home. In the film, he appears to actually take the dive by dropping his defenses in the corner, allowing Blanchard to deliver the ferocious knockout combination.

The romance between Bleichert and Lake is dramatically streamlined in the film; in the novel, they are married and eventually separated during the time that the case comes to a resolution.

In the novel, Bleichert succumbs more explicitly to an obsession with the Dahlia that previously Blanchard had exhibited. This is understated in the film, though suggested in several scenes. At one point in the novel, Bleichert hires a prostitute and has her dress up as the Black Dahlia; this scene is absent from the film.

In the film, the Sprague family is renamed Linscott.

Due in part to the removal of the Vogel subplot, Bleichert's relationship with police captain Russ Millard is diminished in the film. In the novel, Millard assists Bucky during the resolution of the case toward the end; in the film, Millard never appears during this period.

In the novel, Blanchard's confrontation with Bobby DeWitt occurs in Mexico, while in the film, it occurs in Los Angeles. The culmination of this conflict is discovered later by Bleichert when he tracks Lee's movements to Mexico. In the film, Bleichert is present for this incident, which occurs in Los Angeles. Georgie Tilden attempted to kill Lee, but in the ensuing struggle, they both plummet to their deaths.

In the novel, Bleichert's recognition of the significance of The Man Who Laughs painting occurs because the painting is located at a neighbor's house, Jane Chalmers, who is not present in the film. In the film, the painting is in the Linscott residence. As such, the manner in which Bleichert deduces the identity of the killer is markedly different in the film.

In the novel, Bleichert confronts and kills Georgie Tilden at the murder site, but never directly confronts him in the film.

In the film, Ramona Linscott commits suicide; she does not in the novel.

In the novel, the incident between Bleichert and Ramona occurs when they are alone together; the film combines this confrontation with Bleichert's questioning of Emmett and Madeleine.

In the novel, Bleichert arrests Madeleine; in the film, he kills her.

Highly anticipated by many after the success of L.A. Confidential, the film was panned by critics. At Rottentomatoes.com, the film scored a rotten rating of 34%. Many described it as over the top and found the last half hour to be particularly excruciating. Some found it preposterous that the character played by Hilary Swank would be accepted universally by other characters as a dead ringer for the Black Dahlia.

The film made US$12 million after its opening weekend.

Despite the film being a critical and financial failure, it was nominated for an Academy Award for its cinematography. It lost to Pan's Labyrinth. 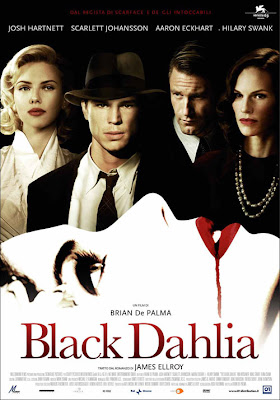