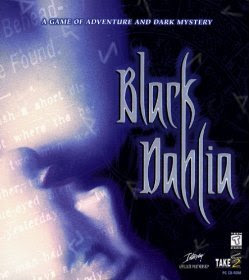 Black Dahlia is a PC adventure game that was released on February 28, 1998 by Take-Two Interactive.

The story, while fictional, is inspired by the real life Cleveland Torso Murderer and the infamous murder of Elizabeth Short in Los Angeles.

This puzzle-based FMV adventure game ties Elizabeth Short's murder to Nazis and occult rituals which the player has to investigate. The game, being an interactive movie, features Dennis Hopper and Teri Garr.

What begins as an interesting tale of conspiracy and murder ends up a confused and confusing gore fest of the not-so-supernatural.

Take 2's track record in the adventure game genre has been shaky, to say the least. First there was the overhyped and disappointing Hell: A Cyberpunk Thriller, which was followed by the just-plain-terrible Bureau 13, and then by the nearly good Ripper. The last game was a major step forward for the company - while it still emphasized Hollywood production values (the big commercial push was the fact that Christopher Walken starred in it), it actually had bona fide puzzles. The latest offering from the company, Black Dahlia, is yet another step in the right direction; there are some interesting design decisions, a few good puzzles, and some amazing technology. But every positive aspect of Black Dahlia is outweighed by a negative, and what begins as an interesting tale of conspiracy and murder ends up a confused and confusing gore fest of the not-so-supernatural.

Black Dahlia loosely deals with the true-life murder of Elizabeth Short, an aspiring actress found brutally murdered in Los Angeles in the mid-1940s. Short's obsession with the color black led newspapers at the time to dub her the Black Dahlia. Though the game takes its title from this famously unsolved case, it only touches on the murder, which is simply one minor plot point in a sprawling tale of a Teutonic order trying to lay its hands on a magical gem called, coincidentally enough, the Black Dahlia.

The game does an interesting job of tying historical fact to its own fiction. The Cleveland "Torso Killer" of the early '40s plays a part, as does the FBI, the Untouchable Elliot Ness, and almost the whole of the Nazi Party. You take on the role of Jim Pearson, a COI operative investigating possible Nazi conspirators in Cleveland. Your investigation leads you to a much deeper mystery, and you must enlist the aid of your predecessor (played by Dennis Hopper in a minor role), who everyone thinks has gone mad because of his obsession with the supernatural. Up until this point, the game is quite fascinating. The puzzles, while sometimes requiring great leaps of logic, are solid and seem like an actual part of the story. But once everything starts to come together storywise, everything falls apart in the game.

First, the story just goes wild and stops making any sense. Your character is plagued by nightmares that start invading his daily life in some of the least impressive horror scenes since Phantasmagoria: A Puzzle of Flesh. The connections between the various divergent elements are all but wrapped up halfway through the game, and you spend the rest of your time simply tracking down the gem in a variety of locales. That is until the final sequence, which not only has little to do with everything that led up to it, but is also a relatively inane and obvious "homage" to the finale of Raiders of the Lost Ark.

And if lamenting the demise of a promising story weren't enough, you're faced with some boilerplate puzzles for which the phrase "tacked-on" would be a compliment. After the first act of Black Dahlia, there are only three real puzzle types: jigsaw puzzles, lever-moving puzzles, and slider puzzles. There are a few interesting and challenging puzzles scattered about, but the preponderance of "secret door locks" just becomes ridiculous. At one point, you must solve two of these in a row. The game then jumps a few years into the future. You're immediately faced with three more. It's almost as if Agent Pearson has been promoted to "director of slider puzzle operations."

What makes all of this nonsense more disappointing is that the technology in the game is really good. It uses sort of a "node" system (similar to Zork Nemesis) in which you move from one predetermined location to the next, and in these places you can look in any direction. The graphics are nicely rendered and the integration of video with pre-rendered backgrounds in the exploration sequences is really impressive.