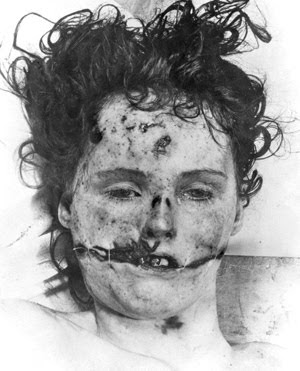 For the month of January 2010, LA Kompany will feature the history of the unsolved 1947 BLACK DAHLIA murder case and showcase recent photographs of the historical locations related to the mystery. 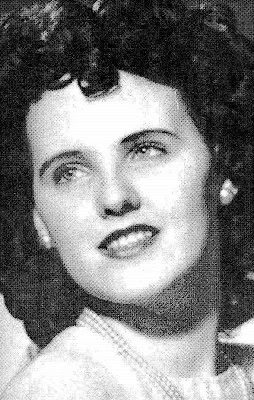 Elizabeth Short (July 29, 1924 – ca. January 15, 1947) was an American woman who was the victim of a gruesome and much-publicized murder. She acquired the nickname Black Dahlia after moving to California. Short was found mutilated, her body severed, on January 15, 1947 in Leimert Park, Los Angeles, California. The murder, which remains unsolved, has been the source of widespread speculation as well as several books and film adaptations.

Elizabeth Short was born in the Hyde Park neighborhood of Boston, Massachusetts, as the third of five daughters to Cleo Short and Phoebe Mae. Her father built miniature golf courses until the 1929 stock market crash in which he lost much of the family's assets. In 1930, he parked his car on a bridge and vanished, leading some to believe he had committed suicide. Later Short discovered that her father was alive and was living in California. Her mother, Phoebe Mae, moved the family to a small apartment in Medford and found work as a bookkeeper.

Troubled by asthma and bronchitis, Elizabeth was sent to live in Florida for the winter at the age of 16, and spent the following three years living there during the cold months and in Medford the rest of the year. At the age of 19, she went to Vallejo, California, to live with her father, who was working at Mare Island Naval Shipyard. The two moved to Los Angeles in early 1943, however an altercation resulted in her leaving and being employed at a post exchange at Camp Cooke (now Vandenberg Air Force Base), near Lompoc, California. She then moved to Santa Barbara, where she was arrested on September 23, 1943, for underage drinking and was sent back to Medford by juvenile authorities. During the following three years, she lived in Florida, with occasional visits back to Massachusetts.

In Florida, Short met Major Matthew Michael Gordon Jr., part of the 2nd Air Commandos and training for deployment in the China Burma India theater of operations. Short told friends that Gordon wrote a letter from India proposing marriage while recovering from an airplane crash he was in while trying to rescue a downed flier. According to Gordon's obituary in the Pueblo, Colorado newspaper, he was awarded a Silver Star, Distinguished Flying Cross, Bronze Star, the Air Medal with 15 oak leaf clusters, and Purple Heart during his service. She accepted his proposal, however he died in an airplane crash on August 10, 1945, before he could return to the United States. She later exaggerated this story, saying that they were married and had a child who died. Although Gordon's friends in the air commandos confirmed that Gordon and Short were engaged, his family denied any connection after Short's murder.

Elizabeth Short returned to Los Angeles in July 1946 to visit an old boyfriend she met in Florida during the war, Lt. Gordon Fickling, who was stationed in Long Beach. For the six months prior to her death, she remained in Southern California, mainly in the Los Angeles area. During this time, she lived in several hotels, apartment buildings, rooming houses, and private homes, never staying anywhere for more than two weeks.

The body of Elizabeth Short was found on January 15, 1947, in a vacant lot in Leimert Park, Los Angeles, severely mutilated, cut in two, and drained of blood. Her face was slashed from the corners of her mouth toward her ears, and she was posed with her hands over her head and her elbows bent at right angles. The autopsy indicated she was 5′ 5″ and 115 pounds, with badly decayed teeth, light blue eyes and brown hair.

Short was buried at the Mountain View Cemetery in Oakland, California. After her other sisters had grown and married, her mother moved to Oakland to be near her daughter's grave. Her mother finally returned to the East in the 1970s, and lived into her 90s.

The Black Dahlia murder investigation by the LAPD was the largest since the murder of Marion Parker in 1927, and involved hundreds of officers borrowed from other law enforcement agencies. Because of the complexity of the case, the original investigators treated every person who knew Short as a suspect who had to be eliminated. Hundreds of people were considered suspects and thousands were interviewed by police. Sensational and sometimes inaccurate press coverage, as well as the nature of the crime, focused intense public attention on the case. About 60 people confessed to the murder, mostly men, as well as a few women. As the case continues to command public attention, many more people have been proposed as Short's killer.

Hotel staff are in the customer service business, and for the most part, they want you to be satisfied.