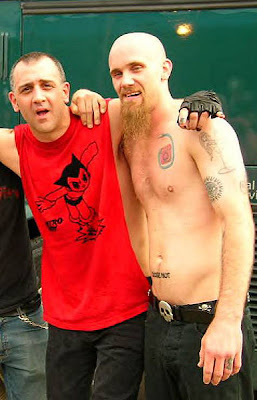 Cafaro is a native of Highland Park, Illinois, and is most well-known as the front-man of Dwarves, a punk rock band.[3] With the Dwarves he has written and produced 10 full length records over a span of 24 years. He has authored two novels, Armed To The Teeth With Lipstick (1998) and Nina (2006).[4] He has produced albums by Mondo Generator[5], The Dwarves[6], F.Y.P, Jon Cougar Concentration Camp, Swingin' Utters and The God Awfuls[7].

Cafaro also released solo material as Blag Dahlia and under one of his other aliases, Earl Lee Grace. Blackgrass (1995), a 13-song LP of bluegrass songs [8], was released on the Sympathy for the Record Industry label using a backing band of real bluegrass musicians. Cafaro also started an acoustic duo with Nick Oliveri named The Uncontrollable.

Two songs recorded by Earl Lee Grace were on the soundtrack to A.W. Feidler's short film, The Job (1997).[9] In 2001, Dahlia performed "Zine-O-Phobia Music" for the Ghost World soundtrack.[10] Blag appears in a Mock Snuff film entitled " Misogynist: The Movie" (2003) The Dwarves song "Massacre", which Dahlia wrote, was on the soundtrack to the 2006 film Hostel.[11] He also narrated the 2007 Gotham Award-nominated independent film Loren Cass.