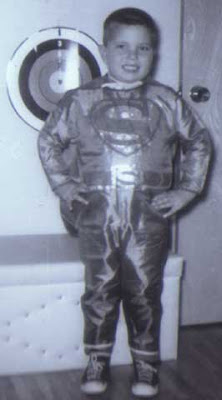 Obviously, SUPERMAN meant a lot to me. I was too young to see the shows during the first run. I wasn't even born when the show began. My 1960s generation watched the shows in syndication. We knew SUPERMAN was dead already. I fondly remember asking my mother how the actor who played SUPERMAN died. She told me he went insane on drugs and thought he really was SUPERMAN, so he jumped out a window and killed himself. My mother, god bless her, got it wrong. She believed the legend and didn't care to know the truth. Years later I learned how GEORGE REEVES really died. I didn't and don't blame my mother, it wasn't until years later than she began to obsessively read the gossip magazines. She was a 1960s housewife and did the best JUNE CLEAVER she could.

Even as I got older and stopped wearing the aging Halloween costume, but continued to read the comic books, SUPERMAN helped me compass my morality. Like Jesus Christ, SUPERMAN was a god incarnate who would rescue us if we fell. He'd be there if our parents, friends and society weren't around. He taught us readers more about good and evil than the church or our parents.

Every comic book reader creates a hierarchy of superheroes. SUPERMAN stood at the pinacle of my superhero pyramid. BATMAN dominated the second level down. Marvel's DAREDEVIL appealed to my concern for the handicapped. THE WATCHER I dug for its intelligence, but the comic book didn't last long. I enjoyed THE FANTASTIC FOUR, but found it comparable to a less camp LOST IN SPACE. I read a lot of SPIDERMAN, although most of my Marvel comics were stolen years ago. I still have most of my DC's however. The FLASH could be cool. I read some GREEN LANTERN. SUPERBOY, SUPERGIRL, LOIS LANE, and LANA LANG comic books remain in my collection. I also have a lot of ARCHIE comics. Prepubescent sexual visual stimulation, I suppose. My collection also includes a lot of horror comics and magazines. In addition to my childhood comic book collection, I think my storage unit still contains my entire MAD MAGAZINE and NATIONAL LAMPOON MAGAZINE collection. Any buyers out there? I'll give you a super-price and a bat-price all in one.

Like the result one gets when first impressions don't match expectations, the first time I watched HOLLYWOODLAND, I felt disappointed. I hadn't been a big fan of Ben Affleck, even in his barely watchable DAREDEVIL movie. The other actors of note, I felt, were wasted in this bio pic bereft of a vision. Then, I watched it again, and again, and again. I even watched it again. Combined with his appearances on political talk shows and this on target performance as GEORGE REEVES, BEN AFFLECK has earned a devoted fan. I now know why the other actors contributed to this mini-masterpiece. Like I said, Affleck's portrayal of GEORGE REEVES is flawless. Affleck is truly transformed into another person. During my first viewing, ADRIAN BRODY's character served as an annoying distraction to the story I wanted to see. I wanted to see a bio pic on GEORGE REEVES and I didn't realize that that's exactly what I had been watching. We witness the life of Reeves through the investigation of the Brody character. Was I expecting some divine revelation or the writer/director's personal opinion on how Reeves was killed? After I changed my narrow expectations, I began to enjoy and understand the film better. Best of all, the film actually summarizes the three possibilites: suicide, murder or accident, without sounding like a History Channel documentary. I, like the film, prefer the "accident" theory. But what 1960s kid wanted to think SUPERMAN killed himself? At least I didn't buy it when my mother told me he jumped out a window. 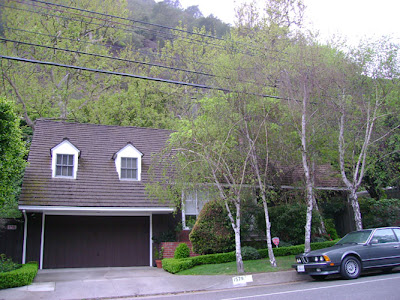 According to the Los Angeles Police Department report, between approximately 1:30 and 2:00 a.m. on June 16, 1959, George Reeves died of a gunshot wound to the head in the upstairs bedroom of his Benedict Canyon home. He was 45 years old.

Police arrived within the hour. Present in the house at the time of death were Leonore Lemmon, William Bliss, writer Robert Condon, and Carol Van Ronkel, who lived a few blocks away with her husband, screenwriter Rip Van Ronkel.

According to all the witnesses, Lemmon and Reeves had been dining and drinking earlier in the evening in the company of writer Condon, who was ghostwriting an autobiography of prizefighter Archie Moore. Reeves and Lemmon argued at the restaurant and the trio returned home. However, Lemmon stated in interviews with Reeves's biographer Jim Beaver that she and Reeves had not accompanied friends dining and drinking, but to wrestling matches. Contemporary news items indicate that Reeves's friend Gene LeBell was wrestling that night—yet LeBell's own recollections are that he did not see Reeves after a workout session earlier in the day. In any event, Reeves went to bed, but some time near midnight, an impromptu party began when Bliss and Carol Van Ronkel arrived. Reeves angrily came downstairs and complained about the noise. After blowing off steam, he stayed with the guests for a while, had a drink, then retired upstairs again in a bad mood.

The house guests later heard a single gunshot. Bliss ran into Reeves's bedroom and found George Reeves dead, lying across his bed, naked and face-up, his feet on the floor. This position has been attributed to Reeves sitting on the edge of the bed when he shot himself, after which his body fell back on the bed and the 9mm Luger pistol fell between his feet.

Statements made to police and the press essentially agree. Neither Lemmon nor the other witnesses made any apology for their delay in calling the police after hearing the gunshot, but the shock of the death, the lateness of the hour, and their state of intoxication were given as reasons for the delay. Police said that all of the witnesses present were extremely inebriated, and that their coherent stories were very difficult to obtain.

In contemporary news articles, Lemmon attributed Reeves's apparent suicide to depression caused by his "failed career" and inability to find more work. The police report states, "[Reeves was]... depressed because he couldn't get the sort of parts he wanted." Newspapers and wire-service reports frequently misquoted LAPD Sergeant V.A. Peterson, as quoting Lemmon: "Miss Lemmon blurted, 'He's probably going to go shoot himself.' A noise was heard upstairs. She continued, 'He's opening a drawer to get the gun.' A shot was heard. 'See, I told you so.'"' However, this statement may have been embellished by journalists. Lemmon and her friends were downstairs at the time of the shot with music playing. It would be nearly impossible to hear a drawer opening in the upstairs bedroom. Lemmon later claimed that she'd never said anything so specific, but rather had made an offhand remark along the lines of "Oh, he'll probably go shoot himself now." 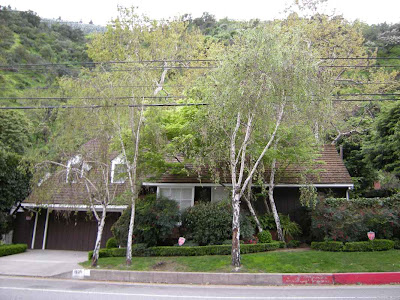 Hollywoodland dramatizes the investigation of Reeves's death. The movie stars Ben Affleck as Reeves and Adrien Brody as fictional investigator Louis Simo, suggested by real-life detective Milo Speriglio. The movie shows three versions of his death: killed semi-accidentally by Lemmon, murdered by an unnamed hitman under orders from Eddie Mannix, and finally, suicide.