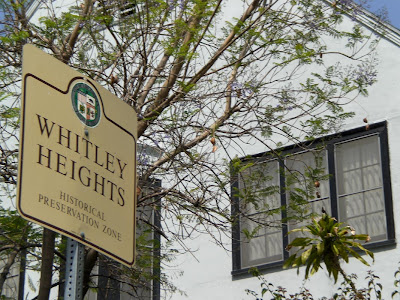 The film offers a cynical look at Hollywood during the late 1930s and tells the tales of several of the residents of the dilapidated San Bernardino Arms: Faye Greener, a trashy aspiring actress with limited talent, and her father Harry, a former vaudevillian working as a door-to-door salesman; sexually repressed accountant Homer Simpson, who desperately loves and is fanatically devoted to Faye; and East Coast WASP Tod Hackett, an aspiring artist employed by the production department of a major studio, who also fancies Faye. It is filled with unusual and often bizarrely disturbing images: a middle-aged man sits in an untended garden staring at a large lizard that stares back at him; a young woman is transported into the film she's watching and finds herself portraying a harem girl in old Baghdad; a dwarf strokes a rooster, bleeding and dazed from a cock-fight, then tosses it back into the ring to its death; an androgynous child standing on the sidewalk beckons to a man through a window and performs a grotesque imitation of Mae West once his attention has been caught. These brief vignettes do little to advance the basic plot, but they serve to comment on the sleaziness of Hollywood and its varied inhabitants. Spectacle fills the screen - a set of the Waterloo battlefield collapses on the extras during the making of the film within the film, and in the film's climax, a world premiere at Grauman's Chinese Theater evolves into a horrific riot culminating in gruesome tragedy.

In the John Schlesinger, Jerome Hellman, Waldo Salt adaptation of the Nathanael West novel THE DAY OF THE LOCUST (1975), veteran vaudevillian Harry Grenner dances his way up the high staircases of the estates found in Hollywood's WHITLEY HEIGHTS neighborhood to sell his patent medicine. He has no buyers. It is hot in Hollywood. Harry has a bad heart. Burgess Meredith was awesome. The novel and the film define the 1930s Hollywood experience. Not so different from today. 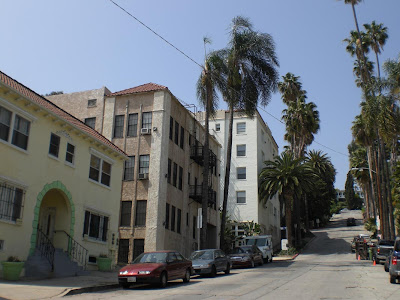 January 1982, I wound up hiking through the John Muir Woods north of San Francisco with a Columbia University Screenwriting student who had less hair than Jack Webb. She was doing the punk thing. She was not only brilliant; she was beautiful. A few months earlier in the fall, we had met during a screening at Melnitz (UCLA Film School) via the introduction from a New Yorker mutual friend of ours. She was renting the lower floor of a house in Whitley Heights. We went to a few museums and a few movies together. She was due back in NYC for start of the spring semester, but we took a brief trip together to San Francisco. After the hike through the John Muir Woods and a few days eating Chinese food and visiting museums, I remember saying goodbye at the airport. I never saw her again. Her Whitley Heights apartment had a fireplace and an incredible view of the city. But the moment I remember most is the mornings. I'm walking out to my car. It's parked slightly downhill, wheels turned to the curve, waiting for me. The sun blares from over my left shoulder as I face westward to put my key into my car door lock. The reflection of light from the Methodist Church on Highland is as blinding as the sun itself. It's a cool morning. There's a nice breeze. I feel refreshed and happy. I take in the moment, then drive down the hill to Sunset and across the westside to UCLA. I'm an adult. I'm a graduate student. And, life is good.