Gangster Mickey Cohen SHOT at Sherry's on the Sunset Strip 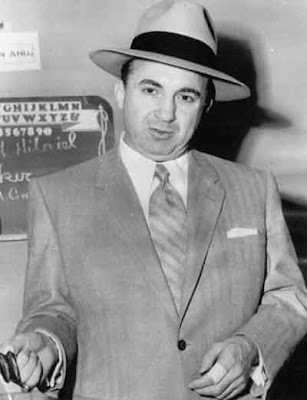 The Sunset Wars had begun when a man in a Panama hat fired a shotgun into Mickey's clothing store on the Sunset Strip, killing one of his cadre of henchmen dubbed the "Seven Dwarfs." Some suspected that Mickey had set up his own man because he ducked into the bathroom before the shooting -- not everyone understood that the gang boss suffered from an uncontrollable urge to wash his hands. It became clear that Mickey himself was a target in July 1949, when he was shot in the shoulder outside Sherry's cafe at 9039 N. Sunset Blvd. The blasts killed another in his crew and sent two women to the hospital: a bit actress described in The Times as "Miss Dee David, a blond," and Florabel, who took a pellet in her hindquarter. Florabel (the epitome of the hard-boiled newspaper dame) said she'd been hanging around Mickey to get a story, "waiting for someone to try to kill him."She got the cops boiling again by passing on to readers a theory "a lot of people have" -- that the ambush wasn't the work of Mickey's rival, Jack Dragna, but that the LAPD was somehow behind it. 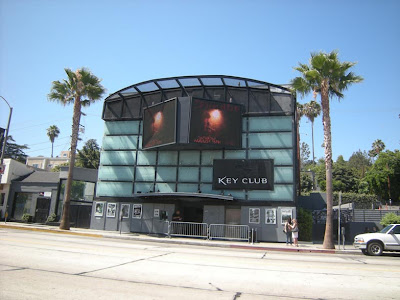 Both Sherry's Cafe and Gazzarri's are long gone. The Key Club now stands on this sacred Sunset Boulevard ground. 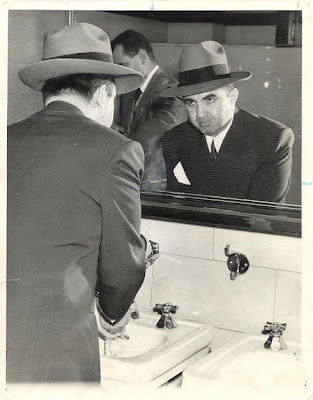 Mickey Cohen was born on September 4, 1913, of a Jewish family. His mother Fanny had immigrated to the U.S. from Kiev, Ukraine. At age six, Cohen was selling newspapers on the street; his brothers Harry or Louie would drop him off at his regular corner. Soon Cohen and his brothers became involved in crime (Cohen's brother Sam, an Orthodox Jew, was an exception). In 1923, at age nine, Cohen was delivering alcohol to customers from a gin mill operated by his older brother in the drug store. Cohen was arrested that same year for this activity, but avoided prosecution due to his brother's connections.

As a teenager, Cohen began boxing in illegal prizefights in Los Angeles. He eventually moved to the East Coast to train as a professional boxer, doing fights in the Midwest along the way. His first professional boxing match was on April 8, 1930 against Patsy Farr in Cleveland, Ohio. This was one of the preliminary fights to the Paul Pirrone/Jimmy Goodrich feature event. On April 11, 1933 he fought against Chalky Wright in Los Angeles, California. Wright won the match and Meyer was incorrectly identified as "Mickey Cohen from Denver, Colorado" in the Los Angeles Times sports page report wrongfully printed. His last fight was on on May 14, 1933 against Baby Arizmendi in Tijuana, Baja California, Mexico. On June 12, 1931 Cohen fought and lost a match against World Featherweight Champion Tommy Paul after he was knocked out cold after 2:20 during the first round. It was during this round he earned the moniker "Gangster Mickey Cohen". Cohen lived first in Cleveland, Ohio, where he met Lou Rothkopf, an associate of Moe Dalitz. Cohen moved later to New York, where he became associates with Tommy Dioguardi, the brother of labor racketeer Johnny Dio, and with Owney Madden. Finally, Cohen went to Chicago, where he ran a gambling operation for the Chicago Outfit, Al Capone's powerful criminal organization.

Prohibition and the Chicago Outfit

During Prohibition, Cohen moved to Chicago and became involved in organized crime working as an enforcer for the Chicago Outfit, where he briefly met Al Capone. During this period Cohen was arrested for his role in the deaths of several gangsters in a card game gone bad.

After a brief time in prison, Cohen was released and began running card games and other illegal gambling operations. He later became an associate of Mattie Capone, Al Capone's younger brother. While working for Jake Guzik, Cohen was forced to flee Chicago after an argument with a rival gambler.

In Cleveland, Cohen again worked for Lou (Louis) Rothkopf, an associate of Meyer Lansky and Benjamin "Bugsy" Siegel. However, there was little work available for Cohen in Cleveland, so Rothkopf arranged for him to work with Siegel in California.

Mickey Cohen was sent to Los Angeles by Meyer Lansky and Lou Rothkopf to watch Bugsy Siegel. During their association, Mickey helped set up the Flamingo Hotel in Las Vegas and ran its sports book operation. He also was instrumental in setting up the race wire, which was essential to Las Vegas betting, a Nevada attraction perhaps only second to the Hoover Dam. In 1947, the crime families ordered the murder of Siegel due to his mismanagement of the Flamingo Hotel, most likely because Siegel or his girlfriend Virginia Hill was skimming money. According to one account which does not appear in newspapers, Cohen reacted violently to Siegel's murder. Entering the Hotel Roosevelt, where he believed the killers were staying, Cohen fired rounds from his two .45 caliber semi-automatic handguns into the lobby ceiling and demanded that the assassins meet him outside in ten minutes. However, no one appeared and Cohen was forced to flee when the cops arrived. After Siegel's death, Cohen was given control of the Las Vegas gambling operations.

Cohen's violent methods came to the attention of state and federal authorities investigating the Dragna operations.

During this time, Cohen faced many attempts on his life, including the bombing of his home on posh Moreno Avenue in Brentwood. Cohen soon converted his house into a fortress, installing floodlights, alarm systems, and a well-equipped arsenal kept, as he often joked, next to his 200 tailor-made suits. Cohen also briefly hired bodyguard Johnny Stompanato before his killing by actress Lana Turner's daughter. Cohen bought a cheap coffin for Stompanato's funeral and then sold Lana Turner's love letters to Stompanato to the press.

Stompanato ran a sexual extortion ring as well as a jewelry store. He was one of the most popular playboys in Hollywood. Singer Frank Sinatra once visited Cohen at his home and begged him to tell Stompanato to stop dating Sinatra's friend and ex-wife, actress Ava Gardner.

In 1950, Mickey Cohen was investigated along with numerous other underworld figures by a US Senate committee known as the Kefauver Commission. As a result of this investigation, Cohen was convicted of tax evasion and sentenced to prison for four years.

When he was released, he started again, and became an international celebrity. He sold more newspapers than anyone else in the country, according to author Brad Lewis. His appearance on television with Mike Wallace in the late 1950s rocked the media establishment. He ran floral shops, paint stores, nightclubs, casinos, gas stations, a men's haberdashery, and even an ice cream parlor on San Vicente Blvd. in Brentwood, according to author Richard Lamparski.

In 1961, Cohen was again convicted of tax evasion and sent to Alcatraz. His heavily armoured Cadillac from this period was confiscated by Los Angeles Police and is now on display at the Southward Car Museum in New Zealand.[1] During his time on "the Rock," another inmate attempted to kill Cohen with a lead pipe. In 1972, Cohen was released from the Atlanta Federal Penitentiary, where he had spoken out against prison abuse. He had been misdiagnosed with an ulcer, which turned out to be stomach cancer. After undergoing surgery, he continued touring the U.S., including television appearances, once with Ramsey Clark.

As an elder statesman, Cohen even appeared on The Merv Griffin Show. Cohen knew everyone in Hollywood, from the entire Rat Pack to Marilyn Monroe. In politics, he befriended Richard Nixon. His pal Billy Graham once asked him to appear at an evangelistic rally in Madison Square Garden.

At the time of the abduction of Patty Hearst, Cohen claimed to know facts about Hearst's abductors and other circumstances of the case. However, journalists at the time dismissed this as way for the "gentleman mobster" to put himself back in the limelight. Mickey called Patty's father "Randy" (Randolph Hearst), and met with him and his wife at Gatsby's, a restaurant he controlled. Mickey had known William Randolph Hearst, with whom he maintained a long respectful friendship.
Cohen's girlfriend Liz Renay herself spent three years behind bars for refusing to squeal on him. One of his many other girlfriends, Candy Barr, served prison time for marijuana possession. Two of his other favorites were Tempest Storm and Beverly Hills, the former having her breasts insured with Lloyd's of London.

Mickey Cohen died in his sleep in 1976 and is interred in the Hillside Memorial Park Cemetery in Culver City, California.

Cohen appears as a character in some of James Ellroy's L.A. Quartet novels, especially the latter three. He features prominently in The Big Nowhere, L.A. Confidential, and White Jazz.

In the 1990 film The Two Jakes, Cohen is fictionalized as Mickey Weisskopf, played by Rubén Blades.

In the 1997 film adaptation of Ellroy's L.A. Confidential, Cohen is played by Paul Guilfoyle.

In the 2005 novel The Lincoln Lawyer, by Michael Connelly, the lead character is a second-generation defense attorney whose father was Cohen's lawyer. 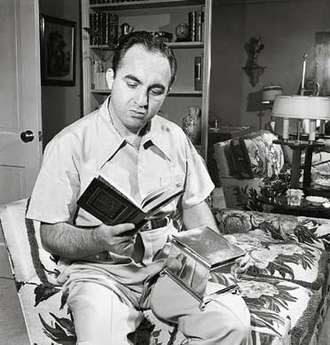 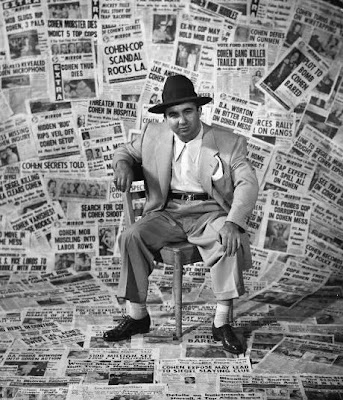