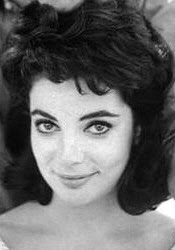 In 1962, she met and began dating a young actor named Andrew Prine. Karyn began to take the relationship seriously, talking family and marriage. Prine - not so much. While being seen with another fresh face in Hollywood was good for his career, her constant amphetamine-fueled whiney, clingy, needy, Hollwood actress act was wearing a bit thin and Prine began to pull back. In July of 1963 she was pregnant and with the help of family friends Marcia and Mark Goddard (of Lost in Space fame) drove Karyn down to Tijuana for an abortion. 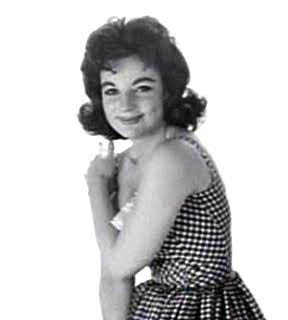 Karyn "Cookie" Kupcinet (March 6, 1941 – November 28, 1963) was an American actress who was found dead at her West Hollywood, California home, in the days following the JFK assassination. It has been theorized that her death, officially ruled a homicide, was connected to the assassination or was the result of an accidental fall, though her family have disputed such claims.

Kupcinet was born Roberta Lynn Kupcinet in Chicago, Illinois to Irv Kupcinet, a sportswriter for the Chicago Daily Times, and his wife, Esther "Essee" Solomon Kupcinet. She acquired the nickname "Cookie" during her childhood. She made her acting debut at age 13 in the Chicago production of Anniversary Waltz and went on to attend Pine Manor College for a semester, eventually studying at the Actor's Studio in New York.[1] 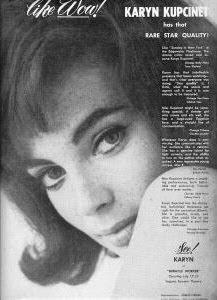 Kupcinet was encouraged into acting by her mother,[1] and was given access to producers through the reputation of her father and his Kup's Column in the Chicago Sun-Times.[1] In 1961, Jerry Lewis offered Kupcinet a role in the film The Ladies Man, where she appeared in a bit part as one of dozens of young ladies in a Hollywood boardinghouse. In 1962, she appeared in the role of Annie Sullivan in a Laguna Beach summer theater production of The Miracle Worker.[1] She appeared in guest roles on television including The Donna Reed Show, The Wide Country, G.E. True, The Beverly Hillbillies and Going My Way. In addition to guest spots, Kupcinet had a regular role in the prime time series Mrs. G. Goes To College (retitled The Gertrude Berg Show during its short run).[2]

Kupcinet's last onscreen appearance was in an episode of Perry Mason entitled, "The Case of the Capering Camera." The episode aired on January 16, 1964, nearly two months after her death.[2] 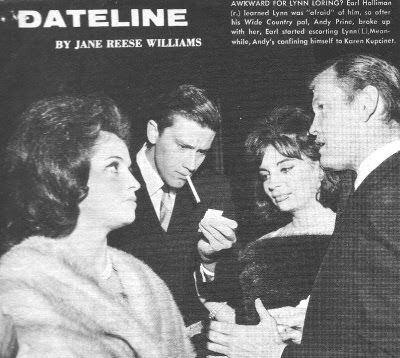 By 1962, Kupcinet was living in Hollywood, had a relationship with actor Andrew Prine, and was getting positive reviews for her acting. However, the relationship was problematic, Kupcinet was abusing diet pills along with other prescription drugs, and she had been arrested for shoplifting.

The problems with the relationship were mainly due to Prine's objections to making the relationship exclusive. After the actress underwent an illegal abortion in July 1963, the relationship cooled and Prine began dating other women. In turn, Kupcinet began spying on Prine and his new girlfriend.[1] It was later determined that Kupcinet had sent threatening and profane messages, consisting of words and letters she had cut out of magazines, to Prine and herself.[1]

The weight problems had started in high school when Kupcinet began taking diet pills. Her weight remained an issue while at Pine Manor College. The pressure to stay thin intensified after Kupcinet arrived in Hollywood, and she soon began abusing diet pills along with other prescription drugs.[1]

A Los Angeles Times interviewer, assigned to help the actress promote The Gertrude Berg Show, noted her talking exclusively about her weight.[3]

On the last day of her life, Kupcinet had dinner with future Lost In Space cast member Mark Goddard and his wife, Marcia Rogers Goddard, at their house on Coldwater Canyon Drive in Beverly Hills (near Mulholland Drive).[4] She was due there at 6:30 pm, but arrived an hour late by taxicab. The couple said Kupcinet only toyed with her food during the meal. Marcia Goddard told two officers from the L.A. County Sheriff's Office that during dinner with Kupcinet "... her lips seemed numb. Her voice was funny. She moved her head at odd angles."[5] The Goddards noticed that her pupils were constricted. Mark Goddard told authorities that he confronted Kupcinet about her altered state during the meal, and she began to cry, putting her arm around him. At one point during the meal, Kupcinet told her friends an unsubstantiated story about a baby that had been abandoned on her doorstep earlier that day.[5] At 8:30 pm, a taxicab arrived to take her home, and she promised to telephone the Goddards soon. 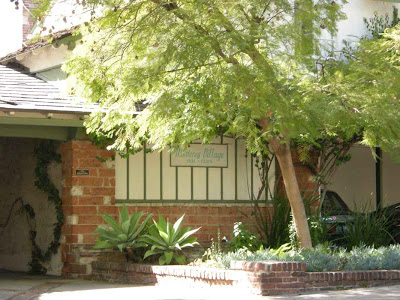 Kupcinet apparently went straight home after dining with her friends. She was visited by freelance writer Edward Stephen Rubin shortly afterward. The two were then joined by actor Robert Hathaway around 9:30 pm. They told detectives they watched TV, including The Danny Kaye Show, with Kupcinet. They all drank coffee until she fell asleep, sitting next to them on the couch. She awoke and went to her room. The men either turned the TV set off or simply lowered the volume (three days later it was still playing with a low volume), and made sure the door was locked behind them before departing at about 11:15 pm. Hathaway said he and Rubin returned to his place and were later joined by Kupcinet's boyfriend, Andrew Prine, who was also Hathaway's neighbor. The three young men watched television and talked until approximately 3:00 am.[5] 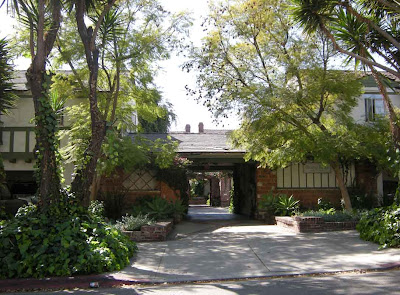 Upon searching Kupcinet's apartment, police found prescriptions for Desoxyn, Miltown, Amvicel, and other medications.[5] Authorities also found a note written by Kupcinet that reflected in some detail her emotions regarding issues in her life (ie., parents, self-image, problems with boyfriend) and people she admired.[6]

Coroner Harold Kade concluded that due to a broken hyoid bone in her throat, Kupcinet had been strangled. Her death was officially ruled a homicide.[7] 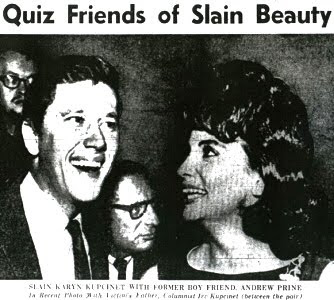 Prine's alibi was that he was out on a date until the call came from Karyn, and didn't see her at all that night. Rubin and Hathaway stated that after leaving Karyn, they walked down to the Raincheck Room (Now the O Bar) for a drink. They were there less than thirty minutes and drove over to Hathaway's house and watched a movie. Prine showed up shortly after (he lived next door) and they all stayed until 3:00 am. Prine then stated he went to Gazzarri's Bar (demolished - where the Key Club is now) right after and then went to bed alone early that morning. 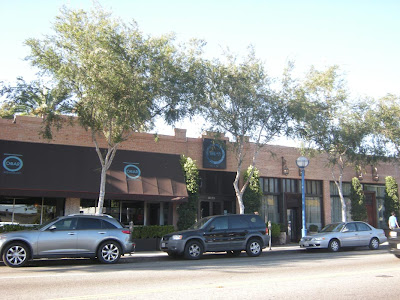 Kupcinet's death was first mentioned in connection with the assassination of JFK in 1966 by researcher Penn Jones, Jr. in the self-published book Forgive My Grief II.[8] Jones claimed that an AP wire service story about an unidentified woman who placed a phone call on November 22, 1963 from Oxnard, California, approximately 50 miles north of Los Angeles was Kupcinet. The woman, who dialed her local operator approximately 20 minutes before the shooting in Dallas, stated that he was going to be shot. Jones alleged that the caller was Kupcinet, attempting to warn someone of the impending assassination. Jones claimed that Kupcinet was told of the assassination by her father (who was allegedly told by Jack Ruby, whom he met in Chicago in the 1940s).[6] Jones speculated that her death was a result of a mob hit to silence her and to send a message to Irv Kupcinet to remain silent about his knowledge.[9] 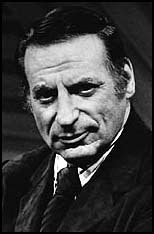 Irv Kupcinet denied that he or his daughter had prior knowledge of the assassination. This was supported by Karyn Kupcinet's friends, actor Earl Holliman, Holliman's then-girlfriend, and Karyn's boyfriend Andrew Prine, who traveled to Palm Springs with Kupcinet on November 22. Kupcinet reportedly seemed upset and shocked about the assassination and did not reveal any foreknowledge of the event.[6]

Crime writer James Ellroy visited the Los Angeles County Sheriff's Office in the 1990s to research Kupcinet's death. He theorized in Glamour Jungle that she could have sustained a fatal injury while taking a shower, dancing in the nude or otherwise moving her body awkwardly under the influence of a stimulant.[5] According to Ellroy, a book that recommended naked dancing was found among Kupcinet's possessions. Ellroy has theorized that the actress followed the advice in the book and started dancing, fell and clipped her hyoid bone on a chair.[5]

Ellroy also claimed that the coroner who performed Kupcinet's autopsy, Dr. Harold Kade, who had been called from his bed at 2 a.m. to respond to the death, had a dubious reputation among county officials as a sloppy alcoholic.[5] He performed the autopsy on Kupcinet and concluded that her death was due to homicide.[5]

Kupcinet's family have disputed Ellroy's theories and maintain that she was murdered.[7]

During the production and subsequent release of Oliver Stone's film JFK, Irv Kupcinet attacked the movie and the conspiracy theories surrounding it.[6] When the film's box office success led to a wave of media attention about the JFK conspiracy, NBC's Today Show broadcast a list of mysterious deaths, including that of Karyn Kupcinet. Irv Kupcinet responded to the Today broadcast in his column in the Chicago Sun-Times of February 9, 1992:

The NBC Today Show on Friday carried a list of people who died violently in 1963 shortly after the death of President John F. Kennedy and may have had some link to the assassination. The first name on the list was Karyn Kupcinet, my daughter. That is an atrocious outrage. She did die violently in a Hollywood murder case still unsolved. That same list was published in a book years ago with no justification or verification. The book left the impression that some on the list may have been killed to silence them because of knowledge of the assassination. Nothing could be further from the truth in my daughter's case. The list apparently has developed a life of its own and for Today to repeat the calumny is reprehensible. Karyn no longer can suffer pain by such an inexcusable mention, but her parents and her brother Jerry can.[6]

On September 30, 1999, an episode of E! True Hollywood Story, entitled Death of a Dream: Karyn Kupcinet, detailed Kupcinet's life and theories regarding her death.[10]

Irv and Essee Kupcinet established a playhouse at Shimer College in her honor.[11]

In 1971, Irv Kupcinet and his wife also founded the Karyn Kupcinet International School for Science, a summer research internships program at the Weizmann Institute of Science.[12] 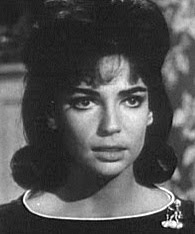