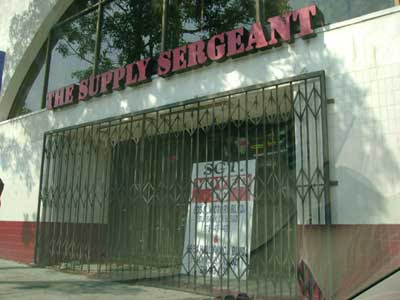 After I finished undergrad and after I broke off my engagement with my college girlfriend, I went to work at an "equity-waiver" theatre in an office building at the corner of Hollywood and Cherokee. I remember one night during rehearsal, I looked out the window and saw a drunk lying across the hood of my car, which was parked in front of Boardners, a below the line working class Hollywood bar. We had our stage manager and a spear carrier walk the poor bastard home. Those were the days when Boardners was cool, not another yuppified hangout.

When I needed a pair of black dress shoes for the lawyer costume my character was to wear, I walked into the Supply Sergeant on Hollywood boulevard, just a few doors down from my office building and the Pussycat Theatre, which in 1980 was still showing "Deep Throat" and 'The Devil in Miss Jones." I never went inside the Pussycat theatre, but I did find a pair of USA made, Navy oxfords that fit my budget at the Supply Sergeant. I found those shoes incredibly comfortable and I appreciated the workmanship. Over the years, I've returned to the Supply Sergeant and bought at least 10-15 pairs of these shoes. A few years after the theatre company was a memory, I bought a bitchin' pea coat there that a girlfriend at the time gave me shit about wearing too often.

So, I was disappointed when I drove up to the Supply Sergeant's Santa Monica location and found it closed. Not a big problem. I'm not shopping for shoes. Since I haven't been to this location in at least two years (even though I live 5 blocks away), I don't know how long the place has been closed. So, now the next time I need a pair of black oxfords, I'll have to drag my ass back into Hollywood or, god forbid, venture into the valley and go to the Burbank location. I just hope it isn't summer. I avoid the valley at all costs during the summer. When I die and go to hell, I'll be given a residence in the valley without air conditioning.
Posted by Brian Aldrich at 6:12 PM