EL COYOTE: Do you get it or not? 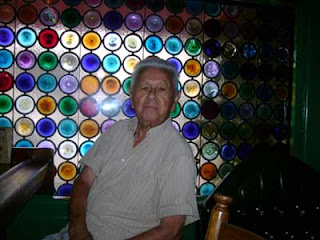 I drove across town to eat lunch at El Coyote today. I sat at the bar and had two scratch margaritas along with a tostada served with fajita chicken. The old guy on my right (see pic above) told me about his life in Larchmont and the dead couple that left their estate to their doctor. The guy on my left (no pic) told me he's lived in the Park LaBrea since the sixties. He runs an ice cream store at Farmer's Market that his grandfather started. He recommended watching the Science channel.

I love El Coyote. There are two types of humans in this city. You either get it or you do not. A third type might be those that don't get it, but pretend to. The food, Californian Mexican diner style, is as kitch as the decor. Get it? (You are eating art and participating in a performance piece.)

Documentary filmmaker and professor Mitchell Block was the first person to take me to El Coyote back in 1978. (He had taken us film students to the cast and crew screening of Piranha at the Director's Guild theatre, which was on Melrose then.) At the restaurant, we sat in the back in a large red vinyl booth and raved about the carnival atmosphere.

All through UCLA Graduate Film school (80-83), we ate religiously at El Coyote as a prelude to double features at the New Beverly Cinema. The food and drink was so affordable you could buy rounds for strangers and we did.

In 85, I moved into the neighborhood. I took up residence at the Cameo apartments on Cochran Avenue just south of 3rd street, three blocks west of La Brea and four blocks away from the entrance to an air conditioned margarita paradise.

Then, I met my wife and we went on our first date to El Coyote. She grew up in the neighborhood and attended Fairfax High. She and her buddy Lisa would pig out there regularly. When we met, we discovered our mutual fondness for the place, so we chose to go there when we scheduled our first date. We sat in the rear west room, which once had a working fireplace. We were seated at a booth with an unstable table, so we switched to another booth. Several margaritas later, we confirmed our suspicions that we were talking to another person from our home planet. When we moved in together a short while later, we elected to stay in the neighborhood and found a larger apartment just two buildings north on Cochran.

Many wonderful evenings were spent at El Coyote with many wonderful people. I particularly enjoyed the rainy Friday nights when the fourth double margarita didn't start to taste too sour.

My friend Steve dined there so regularly that on Friday nights I could have him paged. His wife turned us on to the mexican spaghetti option. At his bachelor party, we smoked a joint at a center table and no one said anything. It was 1987.

In the early nineties, I spent a lot of time hiding out from the heat and reading scripts there. The family matriarch Blanche, dressed in beautiful ornate dresses, would stop by and ask if everything was okay. She was a delightful part of the whole show.

In 93, we moved to Santa Monica and have never found a west-westside alternative to El Coyote. So, we regulary venture back to our old neighborhood and gorge ourselves. My wife meets her best friend there every Thursday night for dinner. (The sour part is that we have to watch how much we drink, so as to safely survive the voyage home to the beach. My wife and I trade off as designated driver.) Anyway, I'm babbling.

Posted by Brian Aldrich at 1:16 AM