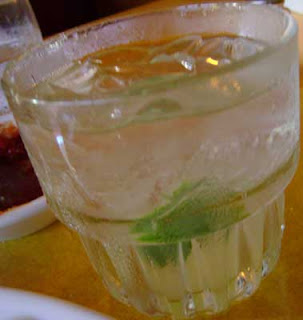 I love Mexican food. I grew up in Gardena and have eaten Mexican food all my life. My first date with my wife was at El Coyote, my favorite Mexican restaurant ever. So, I don't understand those East Coasters who don't like Mexican food. I had a friend from Long Island who detested Mexican food, but he wasn't able to articulate why. He could eat all of the cheapest and crummiest Chinese food as long as he could have it served with duck sauce. He did enjoy Italian food and I think the East Coasters have it all over us in that department. But I'll never understood why this guy hated Mexican food so much. I don't think we ever had a meal together at a Mexican restaurant. He's the kind of guy who would order a hamburger at El Coyote with a Coca-Cola to wash it down. Oh well, what can I say about that?

So, like I just mentioned, El Coyote is my number one choice for Mexican food and Margaritas. I've been going here since my undergraduate film school professor took a group of us there after the cast and crew screening of PIRANA at the old Director's Guild theatre on Melrose. My wife has been going there since childhood. (She grew up in Carthay Circle and went to Fairfax High.) All throughout UCLA grad school, my friends and I would always dine at El Coyote before seeing a double bill at the Beverly Cinema. The best man at my wedding went to El Coyote so often that I used to have him paged there on Friday nights. I used to read scripts in the bar. The old lady who owned the place was alive then and she'd stop by my table to see if I needed anything. When my wife and I lived on Cochran Avenue near by, we went there at least once or twice a week. On one holiday, I forget which, we went there for breakfast and returned 10 hours later for dinner. My wife and her best friend have a weekly dinner there. When her best friend's mother died last year, she held the post-funeral dinner there with all of her friends. El Coyote is a part of the family. I've yet to have a better margarita than the tasty ones they serve. Get the scratch margarita. A couple of those and you'll start seeing the long lost ghosts of Aztecs and Incas. Drive safely. 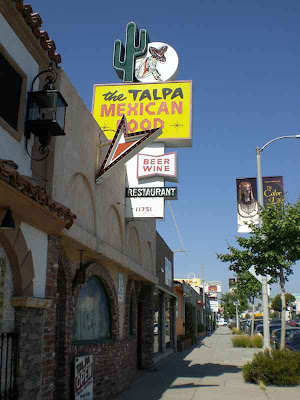 I started going to the Talpa during grad school. I used to see my professors there. They don't have a full liquor license, so they serve beer (Coors is on tap) and wine margaritas that my wife enjoys. We both love the Mexican chicken soup. Lots of spices and flavors, the broth fights back at your ingestion. But the Chicken Mole is king here. I've had overcooked Mole at Lucy's in Hollywood, but never once at the Talpa. Think carmelized chocolate chicken and you'll have an inkling of what this dish tastes like. By the way, the people who work there are terrific and deserve your highest tipping percentage. 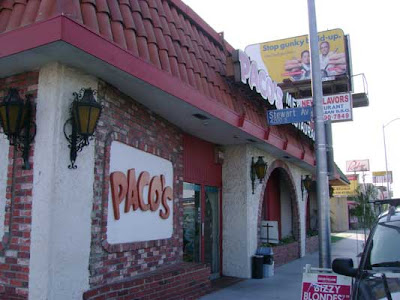 Paco's Tacos really does have outstanding tacos. The place is dark and comfortable. The service is extraordinary. They don't forget about you at Paco's. There's a lot to choose from on their menu, but if you're not in the mood for tacos, try their fish dishes. They know what they're doing. Their margaritas can come by the pitcher and I recommend that with an order of guacamole. 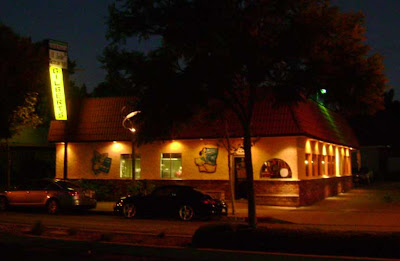 Gilbert's on Pico in Santa Monica is the closest place we could find on the west westside that compares to El Coyote. Lots of kitch on the walls. Their bar is really the waiting area for their restaurant, but you could hang there if you want. I prefer the booths. As you are seated they bring you pickled carrots that are to die for. I've tried making them myself, but can't seem to get the right receipe. The last time I went there they still only take cash. They serve margaritas by the pitcher.

Okay, so those are my regular Mexican restaurants. If I could stand crowds and lines of people, I'd go to one of them tonight. But I can't and I'm not. It's like St. Patrick's Day. On the Big Green holiday you can't get into an Irish bar. Even the British bars are packed with people who don't know the difference or don't care. Same for Cinco de Mayo - every bar and restaurant with a spanish name is packed. So, you do it for me. I'd be in the mood for chicken enchiladas and a pitcher of margaritas. I'm sure my wife would insist on guacamole and some pico de gallo. Hmmm, now I'm getting hungry. Does Denny's serve a mean taco? I have a lot of tequilas in my liquor cabinet. Maybe I'll just open a can of refried beans and make a margarita from scratch? No crowds. As for you guys, drive safe.

Posted by Brian Aldrich at 5:10 PM

The dining guide of restaurant in LA. Cover all restaurants in LA, with their menu and price. Best place to find famous restaurants for dinner or lunch today!

Talpa is awesome, but have you tried Don Antonio's, right next door to it? HOLY CRAP that place is good. Plus margaritas.