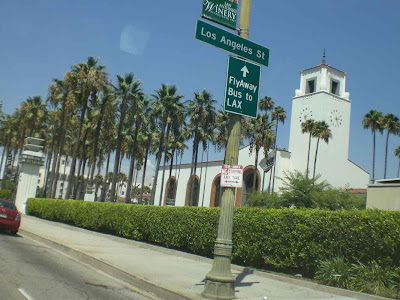 1939 was a good year for Los Angeles. It was a golden year for movies. The cinema had matured to a peak ripeness never seen since. But more on that some other time. Downtown Los Angeles' Union Station opened in 1939.

I adore Union Station and have visited there often, but not recently. Once after returning from an East Coast trip by air, I retrieved my unnecessaries, which I had shipped by rail, at the Union Station baggage desk. But that was a long time ago. I remember feeling very noir at the time.

Did you know that Union Station was built upon the remains of the original Chinatown?

LAist tipped me off to the anniversary. They have an excellent series of Union Station photos on their blog:

Posted by Brian Aldrich at 9:19 PM