Hollywood Forever Cemetery used to be a dump. What few paved roads it had were spotted with holes, lined with veins of crabgrass, and covered with lots of dirt. The lawns were unkempt and gravestones were buried beneath the neglect. I don't know how fish were able to survive in the polluted and muddy lake. Then, a young fellow with vision and a bankroll bought the place and it's become a model for the postmodern cemetery in the 21st century. 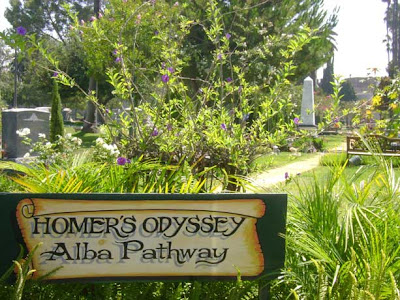 The grounds were cleaned up. Roads were paved. The lake and the fountains were refurbished. You can build a monolith to yourself or an ancestor. You can press a button on a monument and watch a video of the dead person's lifestory. On hot summer nights, you can watch a movie being screened outdoors. 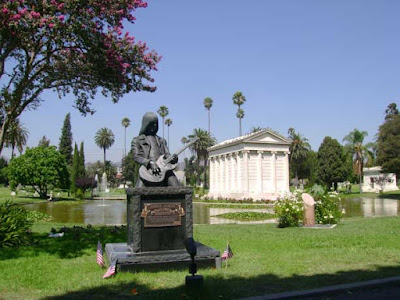 So, after my luncheon at El Coyote, I drove through the gates of Hollywood Forever Cemetery and headed over to the lake area. I passed by Johnny Ramone's cenotaph and bid hello to the angel with the harp. Back against that ivy covered wall is an area I call "kid alley." The plots along that wall are all childrens' graves garishly decorated with religious and holiday knick-knacks as well as lots of toys. Come Halloween, the alley's creepiness approaches the sublime. 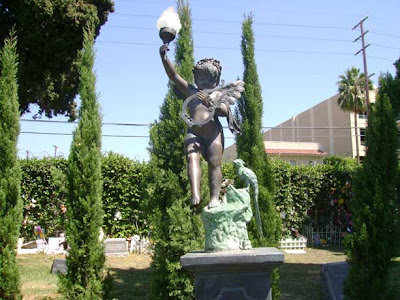 After parking my Mercury, I walked over to see if a tombstone had finally been placed on the grave of Darren McGavin. Well, there wasn't a stone marker yet and the temporary plastic sign still stuck out of the ground, but a slab of concrete had been placed atop the grave. I wondered if either the cemetery or the relatives of the deceased were concerned about X-Files fans bodysnatching his corpse or maybe it was a place for the movie night audience members to sit instead of wearing out the grass when visiting one of their favorite actors. This was a mystery worthy of Kolchak. 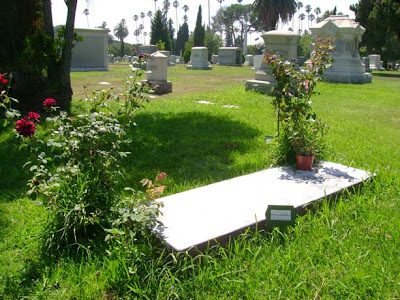 As I turned around to go over to the lake, I noticed this new structure being built. The cemetery is becoming peppered with huge, new monuments to the wealthy, immigrant dead. The stones used are beautiful and engraved with photographs of the dearly departed. Some even have life-size statues of the deceased sitting on their favorite throne. 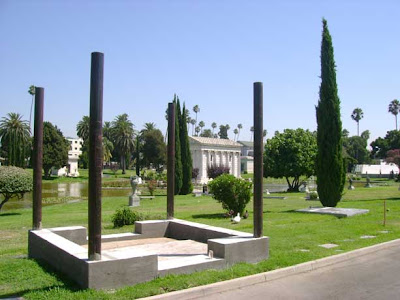 The heat and my undigested lunch were starting to get to me, so I headed for the lake hoping the spray from the fountains or the shade from the trees would offer me relief, but that's Part Three.