After graduating UCLA Film School with an MFA in 1983, I took a much needed vacation. After spending a few days in Laguna Beach with an old girlfriend and a bottle of Stoli, I headed north to San Francisco by myself to join up with a house full of friends. Along the way and for the first time, I stopped by Cholame, more specifically, the intersection of highways 41 and 46 in central California where James Dean died in an auto accident on September 30, 1955 (just seventeen days after I was born). 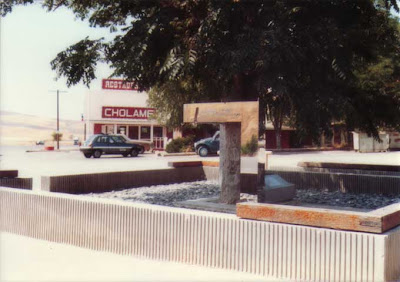 You get there from L.A. by following James Dean's trail. Before the 5 freeway was built, Dean headed north on the 99. He got a speeding ticket before he turned off 99 north and headed west on the 466 (now 46). After passing through Lost Hills he and his pal Rolf Wutherich stopped at Blackwell's Corner for a snack. Dusk was coming and they had a ways to go to get to the race in Salinas. Dean was driving his new Porsche down the hills on 466 headed toward the intersection with the 41. Driving east, student Donald Turnupseed started to take a left turn and didn't see Dean's silver car hidden in the sun's glare. They crashed and Dean died. Wutherich survived to die in another car accident. Turnupseed wound up hitchhiking home, ignorant of the celebrity of the man who died. James Dead became a legend. 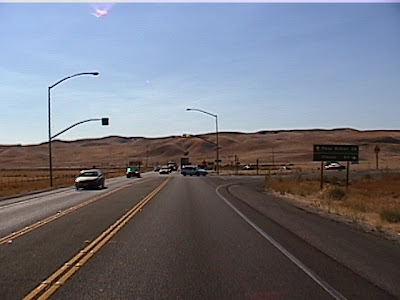 Through the years, I've taken this path whenever driving north or returning south. It's a good way to beat the Santa Barbara traffic no matter which direction you are going. In 1984, I passed through Cholame with a friend about midnight and took a chilling bathroom break in the cold winds. The first time I stopped there with my wife sometime in the late eighties, we were returning from a trip to Big Sur. The elderly women who ran the cafe then served us marvelous biscuits and gravy. In 1999, I brought a film crew up to Cholame and filmed a sequence for my movie POSTMODERN BLUES, an experimental feature film with a main character who admires James Dean. Since then, more and more people have come to know about Cholame and stop by. I think they still serve the biscuits and gravy, but those ladies we met have moved on. 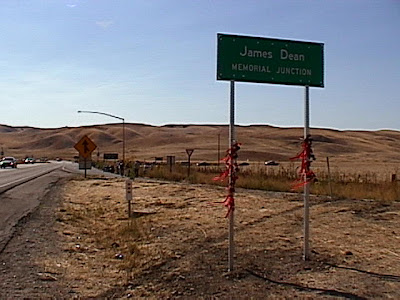 On the fiftieth anniversary, I drove up there to watch the celebration. There were fifties bands and replica cars and tons of fans. A dead-on James Dean impersonator in a red windbreaker spent the day combing his hair, smoking cigarettes and having his picture taken. 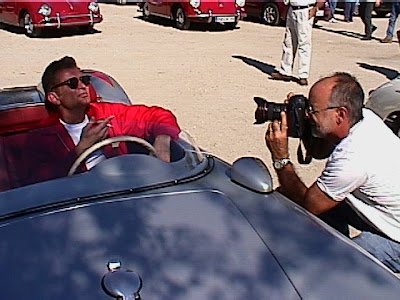 A local politician showed up for the anniversary to make a speech. He tried to dress up like Dean, but looked more like George W. Bush at a fifties party. (He's the guy dressed in a white shirt and beige pants in the background of the picture below.)

Towards dusk, we all trudged down to the intersection to watch the sunset. 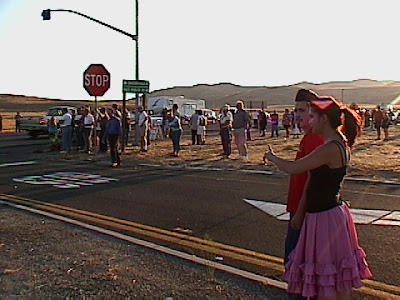 An improvised memorial was set up on the side of the road where Dean's car landed. 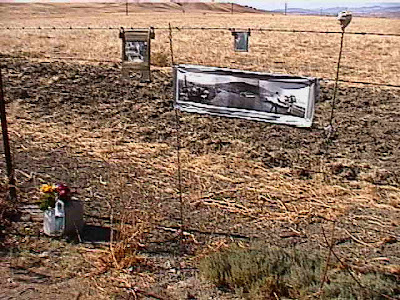 At the designated time, fans cheered and trucks blew their horns. It was the moment we were all waiting for. James Dean was 50 years dead and those of us old enough felt every year of it.

Posted by Brian Aldrich at 1:34 PM